From childhood, we show a proclivity for promiscuous teleology, readily ascribing function and purpose to the objects around us (Kelemen, 1999). We view an apple primarily as nourishment; an apple tree as a source of apples first and foremost. We are wont to believe that most every thing, natural or artificial, is there for a special reason; designed with a larger goal in mind.

This teleological bias is often present in neuroscience commentary. The finding that a brain region shows more neural activity when people (often adults) do X than when they do Y is taken as evidence that our brain is “hard-wired,” or evolved, for the purpose of doing X. Using this logic, neuroscience commentators claim that psychological phenomena ranging from altruism to racism are built in to our neural hardware from birth.

The brain is by no means a blank slate at birth, of course; it is the product of evolution (Creely & Khaitovich, 2006). But genes are not destiny; the experiences that we have and the environments that we navigate shape how our brains function in critical ways. For example, the brains of blind humans repurpose cortical regions typically involved in vision for other senses, like audition and touch (Pascual-Leone, Amedi, Fregni, & Merabet, 2005). 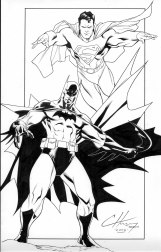 Consequently, the finding that a brain region shows more neural activity when people do X than when they do Y need not mean that this brain region evolved to do X; there may be no “hard-wiring” at work. Our brains can tell Batman and Superman apart, but it does not follow that we evolved an ability to identify super heroes. What we experience (e.g., comic books and action movies) has an important influence in how our brains function. This neuroplasticity helps us adapt successfully to an environment that changes constantly (van Praag, Kempermann, & Gage, 2000).

Neuroscience commentators who rush to evolutionary interpretations of neuroscience studies are often making a Procrustean bed. They reach conclusions that say more about their promiscuous teleology than about what can reasonably be induced from the data at hand. It is difficult to show that an element of our psychology is the product of evolution.

For example, to show conclusively that laughter is “hard-wired” in the brain would require a deprivation experiment: does a person raised in isolation laugh spontaneously? Barring such an unethical study, it would require converging evidence from scientific experiments that examine development (do infants laugh before they hear laughter?), culture (do people in all cultures laugh?), and genetics (can we identify genes that, when expressed, allow us to laugh?) (Nota bene: See here for an interesting discussion on the evolution of laughter.)

To get new posts via email, click the Follow tab on the bottom right corner of the screen.

3 thoughts on “The Brain Is Not That Hard”